Day 10 brought a drive out of the wild and into “civilization”. We were headed to Etosha National Park (with showers and beds), a 22,270 sq km/8,600 sq mi park which gets its name from the Etosha Pan, a salt pan which covers a quarter of the total area of the park and is so large that it is identifiable from space. Our drive to the park took us through scattered Damara villages, where farmers who subsist on herding cattle, sheep, and goats still live primarily in simple homes constructed from dung and termite mud (collected from MASSIVE termite hills) spread on a wooden frame. 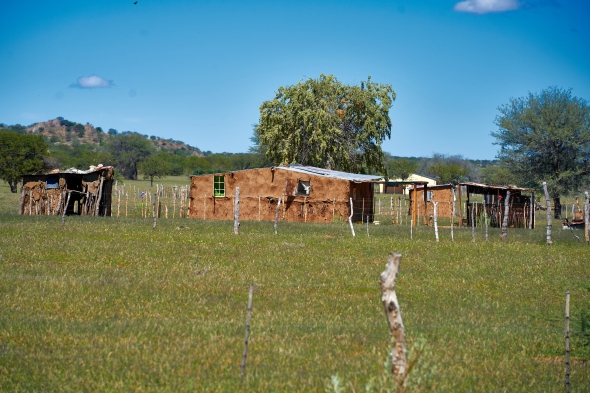 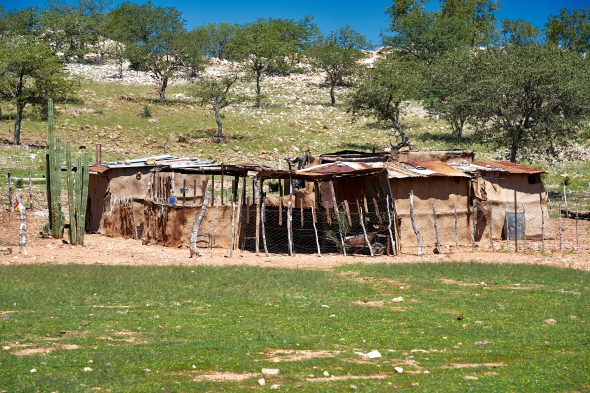 Massive termite hills were scattered throughout the countryside.

Himba Women out for a stroll 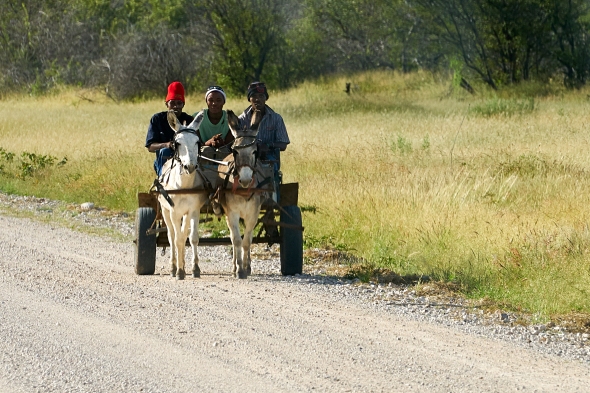 Night 9 brought a goodnight and goodbye to the Damaraland (Palmweg) Concession in north-western Namibia, bringing to a close the most primitive wild camping portion of the tour. From here we head back to “civilization” in the form of Etosha National Park.

Click on photo to view an enlarged 10 panel shot of Milky Way taken from the edge of our campsite. 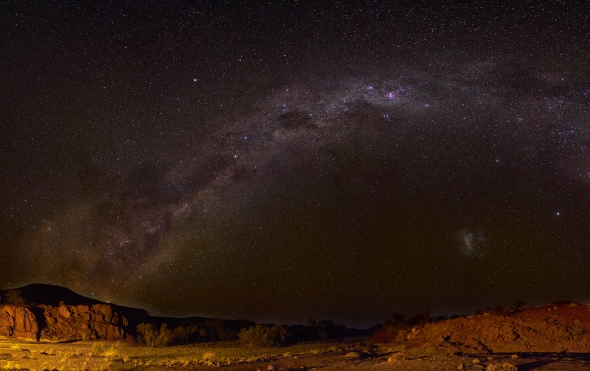 Exploring the Wilds of Damaraland, Namibia

Namibia Days 8 and 9  were spent exploring the massive  Damaraland  (Palmweg) Concession in north-western Namibia. Daily sunrise departures from our camp into the concession provided the best opportunity to enjoy the cool mornings and experience the wildlife as they completed their nighttime activities and began to settle in and take cover from the approaching scorching sun and high temperatures. Our afternoons were spent taking cover as well, mostly resting/reading and playing games in the shade at camp. Late afternoon and evenings consisted of additional drives to explore the surroundings and/or gin and tonic “sundowners” as the sun dipped beneath the African horizon. 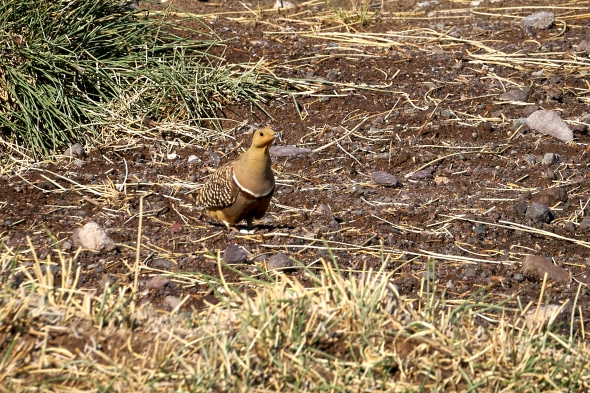 Rhinoceros rubbing stone, which has been polished to a shine over the centuries by Rhinos scratching themselves. 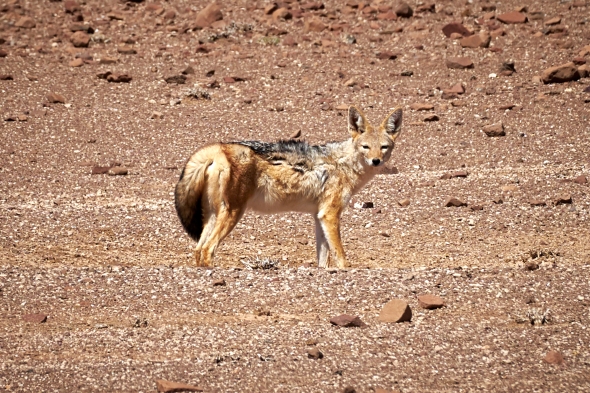 Baking bread in a cast iron pot over coals, a nightly ritual.

Creepy to think that if we stepped out of the vehicle these guys would tear us to shreds. 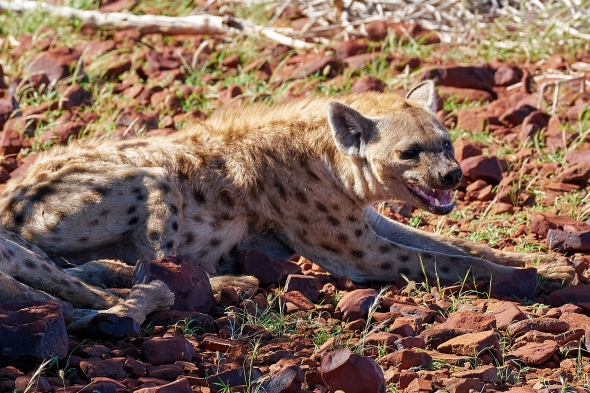 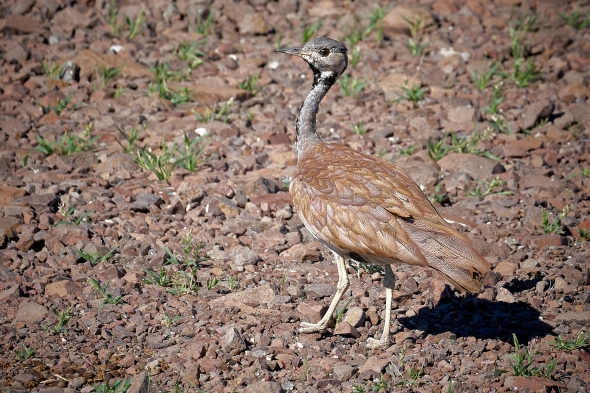 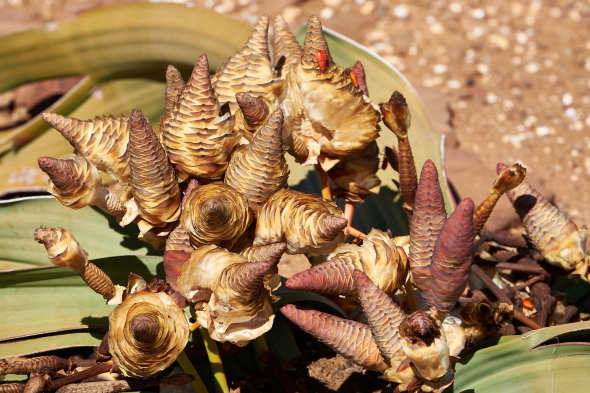 Welwitschia (Welwitschia mirabilis), the “National” plant of Namibia and endemic to the Namib Desert. Each plant produces only two leaves, which split into many segments as a result of the leaves being whipped by the wind. The largest plants are over 1500 years old.

The long day 7 drive through the concession area was a slow, difficult, and at times uncomfortable (very steep terrain mixed with heavy rains) journey. As we arrived and searched out a campsite, the clouds began to clear and we were treated to a spectacularly beautiful double rainbow sunset over the camp. We were now as far out of touch from the rest of the modern civilized world as I have ever been. Over dinner our guide Sasha described the “lion” protocol for the camp (imagine him telling us this at night as light from the small fire flickered on half of his face):  Never leave your tent alone at night. Need to pee? Take the bucket from outside your tent door into your tent, pee, put the bucket back outside of the tent. Need to do a #2? Wake the three men up and walk as a group to the makeshift toilet as you scan the surroundings with headlamps for reflective “eyes” around camp. Hear something at night creeping outside your tent? Don’t move, make a noise, or turn on your light. Do not call for anyone. Follow these rules, and you likely will not get eaten. We all slept great after that. And for the record, we did hear some hyenas not too far from camp as we were falling asleep.

This is my favorite photo from the entire trip. Click to see it in full resolution!

Into the Wilds of Damara Concession D7

Day 7  was when the adventure really  stepped it up a notch. We were now headed out for three nights of wild camping in the Damaraland  (Palmweg) Concession, a massive, roughly 5,500 km2 /2,200 mile2 conservation area in north-western Namibia. This open and wild region is the home to a large variety of species, including lion, elephants, mountain zebra, giraffe, and nearly 70% of the world’s free roaming black rhinos. Traveling and camping in the concession would allow us to experience these animals in their true open and untamed native habitat, unlike what we would later experience in the more commercial National Parks and Reserves. A long and arduous drive on little-used uneven roads, at times through torrential downpours, was worth the surprise we had waiting for us when the rains stopped and we arrived at our remote campsite (see next post!). 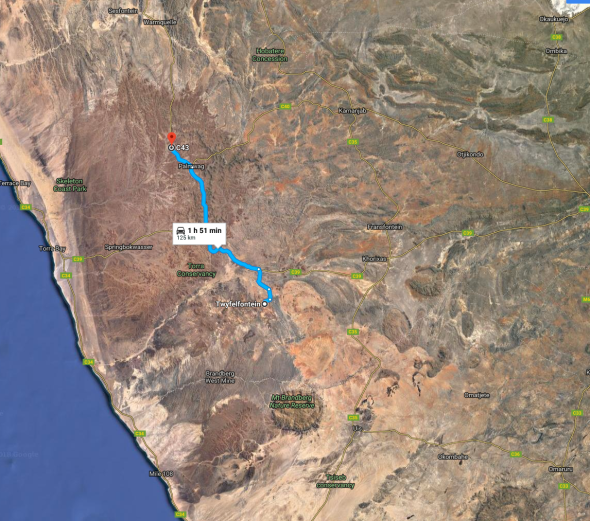