Stunning Roman Mosaics at The End of the Sicilian Rainbow! 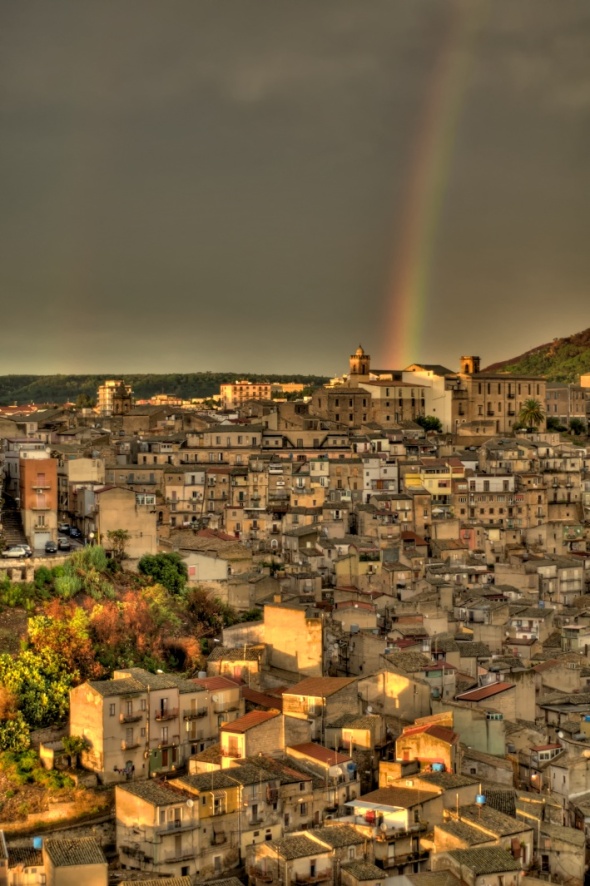 We drove east from Selinunte on a day that was absolutely DUMPING rain, intending to tour the Valley of the Temples in Agrigento. The Valley is one of the most outstanding examples of Greek art and architecture on the costal areas of Southern Italy and consists of seven temples dating back to the 5th century BC. These include the Temple of Concordia, which, due to its excellent overall condition, is ranked amongst the most notable edifices of the Greek civilization existing today. The skies were still dumping when we arrived,  so we were only able to get a quick peek before continuing our long drive east.

We arrived in Piazza Armerina as the storm was clearing, and were treated to this amazing view of this 11th century town from our balcony. Piazza Armerina is the town which accommodates the guests who come to visit the nearby Villa Roman del Casale, which is the home of the richest, largest, and most complex collection of Roman mosaics in the world (see upcoming blog entries!). 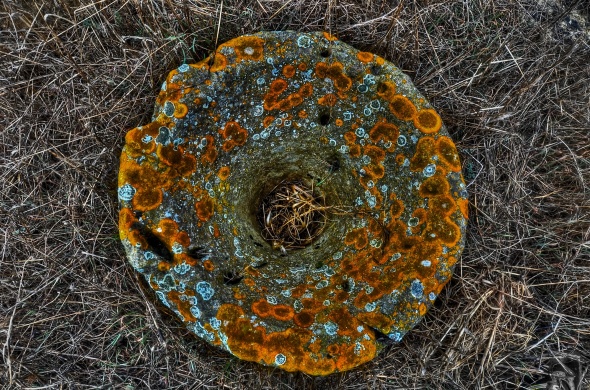 I came across this item while wondering around the piles of remains of the once great Greek city of Selinunte in Sicily. Image is HDR with additional touch-ups including selective desaturation of the grass with Aperture. 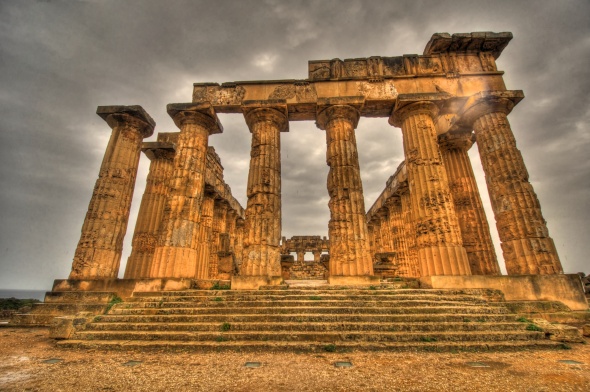 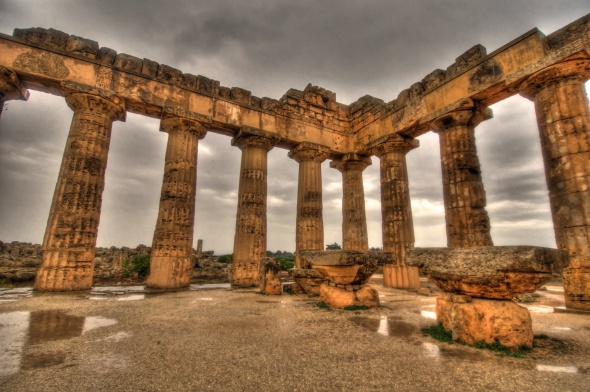 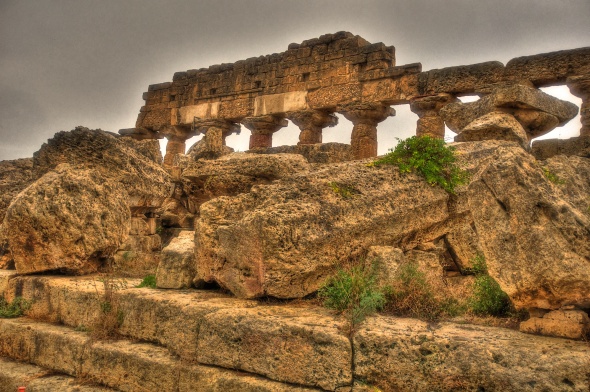 The ruins of Selinunte are some of the most impressive of the ancient Greeks. Selinunte was once one of the richest and most powerful cities in the world. Established  in 628 BC, it was the most westerly of the Greek colonies, and grew to approximately 100,000 inhabitants. It was sacked and destroyed in 409 BC by Hannibal and the Carthaginians, and lay in ruin until excavations began in 1823.

Unlike the majority of Greek and Roman ruins in other countries, the Selinunte ruins are wide open to the public, allowing you to stroll in the temples and climb on rubble, which makes for a much more engaging experience, especially for the children. Views from the ruins over the Sea are spectacular, and this area is well worth the day trip. I don’t, however, recommend staying overnight in the nearby village as it has no appeal and is fairly run down and depressing.

Images were created from 3 handheld shots bracketed at 2 stops and combined with Photomatix. Please excuse the rain on the lens, it was terrible weather and my trusty camera assistant was off playing in the rubble.

Visiting The Center For The Cult Of Venus. 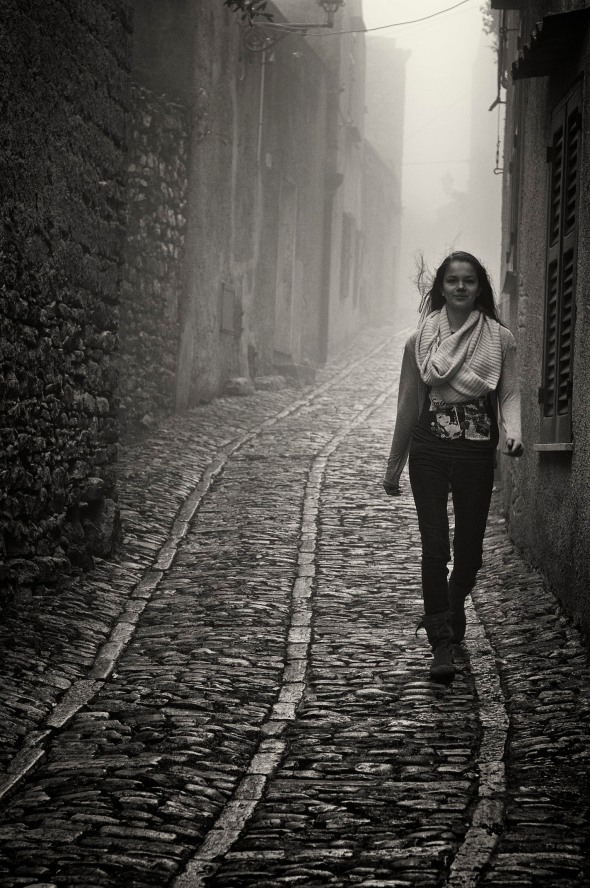 Next stop on the Motherland Tour of Sicily was Erice, a small medieval town situated high atop the legendary mountain of Eryx. This village supposedly has fabulous views looking west over the port of Trapani, but we were caught overnight and the next morning in the thickest and eeriest fog I have ever seen, and we were lucky to not bump into walls as we toured the streets. We were, however, able to locate the world-famous pasticceria “Maria Grammatico“, who is Siciliy’s most famous pastry chef and the subject of Mary Taylor Simeti’s book Bitter Almonds. I have to admit, though..although her cannoli were heavenly, the best cannolli were yet to be had until we reached the east  coast of Sicily (check back for details!!). 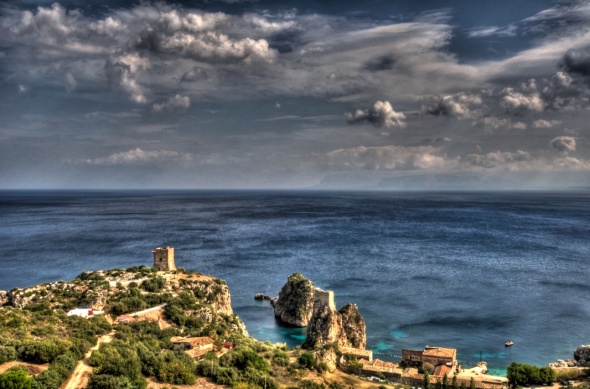 You may have gathered from my blog that I am an American expat currently living with my family in Switzerland.  One of my goals while we are here is to bring my children to visit the places where their ancestors were born. I had two great grandparents that were born and lived in Sicily and came over to the United States by boat around 1913. My great-grandfather, Gaetano Turrisi, died when I was young. My great-grandmother, Grace (Fazio) Turrisi lived for over 100 years and luckily I had  the ability to know her very well while I was growing up. Recently I had the opportunity to travel to Sicily with my family and visit their birthplaces. The following posts with be a photo-journey of our circumnavigation around the island.

The first shot was taken in the tiny village of Scopello, about an hours drive counterclockwise from Palermo. The photo is the view of the bay and the Tonnara di Scopello, likely the only remaining evidence of the traditional Mediterranean tuna fishery industry. We happened to stumble upon this gem, and ended up spending hours here frolicking in the sun and warm sea. It was VERY difficult to ultimately leave and continue our drive to our next destination when it was finally time to head out. If you happen to be in the region, this is WELL worth a short lunch break. 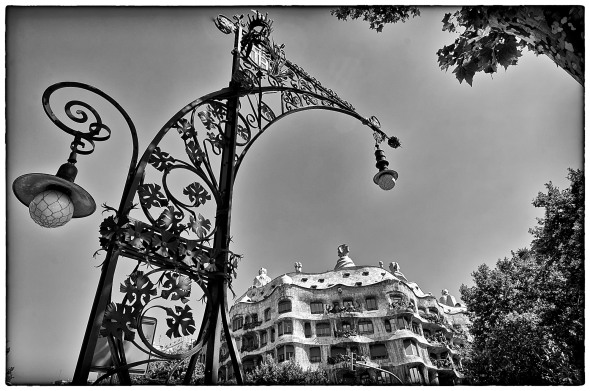 Modernista Lamp Post designed by architect Pere Falqués for the city of Barcelona in 1906. Gaudí’s Casa Milá can be seen in the background. Image converted to B&W with Silver Efex Pro, touched up with Aperture, decreased noise with DFine 2.