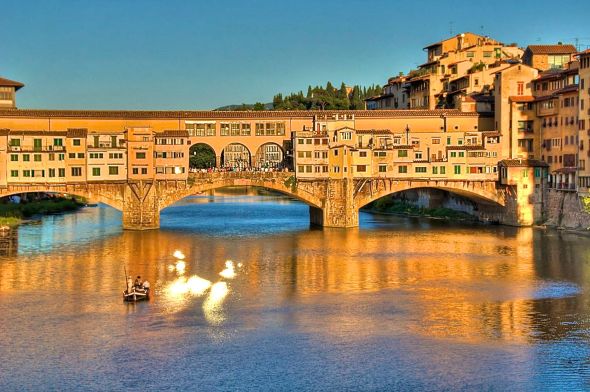 First, I want tho say that IT’S GREAT to be back. I have been “offline” for quite some time and have neglected this blog that I had come to enjoy so much. I had some pesky cervical spine discs that decided to herniate over the years, and finally they got the best of me. Pretty much anything, even computer time, became an unbearable “pain on the neck” (and back, shoulder, arm, and hand).  Also,  carrying a bag as light as a camera bag was too much. The offending discs have since been removed, and I now have three fused vertebrae in my neck to show for it all!  I just got clearance to carry more that a few kg, so hopefully carrying the camera will keep me motivated to pick up again with the blog.

This is a shot of the Ponte Veccio Bridge over the River Arno in Firenze (Florence) Italy. My wife and I visited for a few days last summer, and had a fantastically fun and romantic trip to the “Cradle of the Renaissance “. As Rick Steve’s says, Florence is a “Super Market Sweep”, and the groceries are the best Renaissance art in Europe! (and home of Italy’s best gelato! ). I was most focused on a tour of as many Michelangelo’s works as I could see, which Florence hosts many.

This is an HDR that I created from one source image. Three copies were created at 2 f-stops intervals,  merged with Photomatix,  and tuned in Aperture.